They simply forgot that they live in a desert 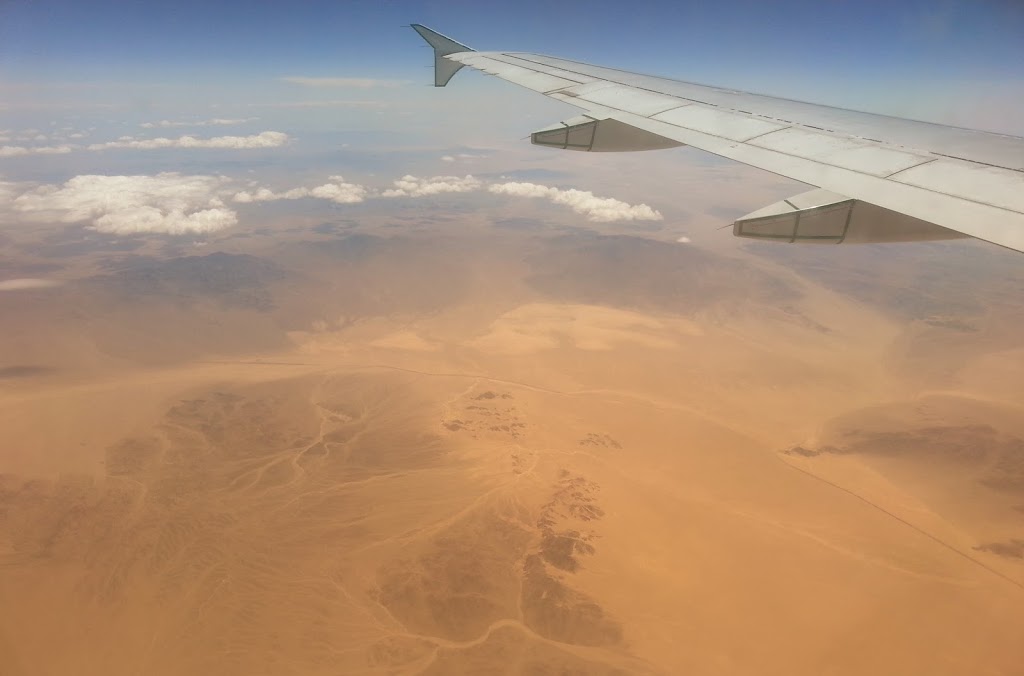 My journey through California.
By Ap Verheggen

The sky was clear when we flew in to Los Angeles. Even from my bird’s eye perspective, the dimension of the deserts that we crossed overwhelmed me. I asked myself how somebody could survive in this harsh landscape. But when the plane descended on its path to LAX, the landscape turned suddenly from desert into a web of streets, buildings, gardens and deep blue spots: swimming pools.
Later in a bar (every visitor in a bar or restaurant in California is offered a huge glass of water, filled with ice, as a welcome gesture) we talked with a friend, who lives in a prestigious neighbourhood in the hills of LA about the water crises.

He told us that his area has plans to recycle wastewater into a kind of grey water that could be used by the households, as a measure of relief for the overstressed water supply to his neighbourhood. It sounded like an ambitious plan, but even he questioned how many neighbours would stay if they have to use their own sewage…. “I’m not sure how many of my neighbours would agree to drink their pee,” he told us.

Los Angeles and other parts of Southern California are mostly fed by water that comes from Lake Mead, where the water from the mighty Colorado River bounces against the famous Hoover Dam. Driving to Lake Mead from LA, the landscape changes from green into desert in a matter of seconds. Beautiful!
After a couple of hours we arrived in Las Vegas. We entered our 35 dollar-a-night room and noticed that the tap in the shower was leaking like a river. Luckily for us there was not drip-drip kind of leak (that would have kept us awake). During our stay of two nights the hotel did not bother to fix it, which can only mean that repairing a simple leak is still more expensive then the leaking itself. Potable water in Las Vegas must be free, otherwise for sure it would be fixed in a day, like everywhere else. 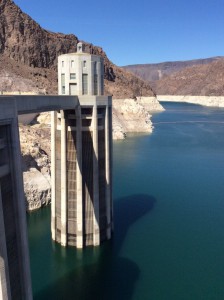 Arriving at the Lake Mead Park, we started our investigation at the visitors centre. The lady behind the desk showed us on a map of what remained of Lake Mead. She told us that only 36 percent of the water still remained in the reservoir, because of the drought. More worryingly, she told us that Lake Mead would never be full again. The demand for water is simply more than the supply. When the water inlets that lead to pipes dry up,  they simply dig a new inlet to buy a bit of time. It’s a critical situation that we certainly didn’t expect.

Standing on the mighty Hoover Dam and looking down to the water gives rise conflicting impressions: A grey line on the rocks marks how high the water once reached, but the amount of water still there seems impressive, especially seen from a bird’s eye view.

We followed a road that promised to lead us to the lake, away from the dam and into the valley. At one point the gravel trail changed into smooth concrete and then back again. We continued to drive for another kilometre to arrive at shore of Lake Mead. Only then did we really appreciate how much lower the current water level is from that grey line that indicated the old “normal” surface level: From where we stood, a car parked above us by the rocks close to that line had the dimensions of a housefly. We realized the concrete patch in the road, way above, was once a boat launch. Now we could also explain the ladders high up against the rocks: they were ladders that people used to climb out of the water. It was like looking at the old Lake Mead from the fish’s eye view.

Continuing our tour, we found a sign – in the middle of the desert — that explained the Vegas Wash –Wetlands-. A decade ago the wetlands would have started just by the sign, but of course, we couldn’t find water at all.

The real shock came when we left the park and after just a few kilometres and some curves, we saw a huge green golf course, kept lush by sprinklers. Bizarrely, there were no golfers to be found – the desert heat was too much for them. We actually stopped the car to take in this strange scene – certainly it ranks among the weirdest things I had ever seen.

On our way back to LA I talked with a teacher who lives in Las Vegas and asked her about the water situation. She told me that she was concerned about the quality of the drinking water because she believed that pollutants sink to the bottom of the lake and she was afraid that soon the government would not be able to guarantee the quality of the water anymore. It was a worry that she came up with herself, but it helped her make the decision to leave and sell her house before others come up with the same idea and her property was worthless.

Arriving in LA, we were welcomed by again sprinkler installations, whose purpose was to water public grass next to the highway. The City of Angels appeared changed, because I was now experiencing it from my new fish eye perspective. The amount of water that is used by an average Californian household is only a small drop compared to what agriculture and industry use. People know this, and the virtual circle of no escape is created.
California is famous for its sustainability and for being the hub of the globe’s most innovative companies, it seems to have lost its perspective when it comes to own water. Even now, as the minute hand is inching toward midnight, the solutions generally proposed are founded on the idea of conservation and mitigation – which while important comes too late given the State’s state of affairs.
Instead of waiting for rain, we should all invest in revolutionary ideas and out-of-box thinking to help us raise water levels. There is always a solution, it just needs investments and time, and that’s what is also drying up. California is touching the tipping point.