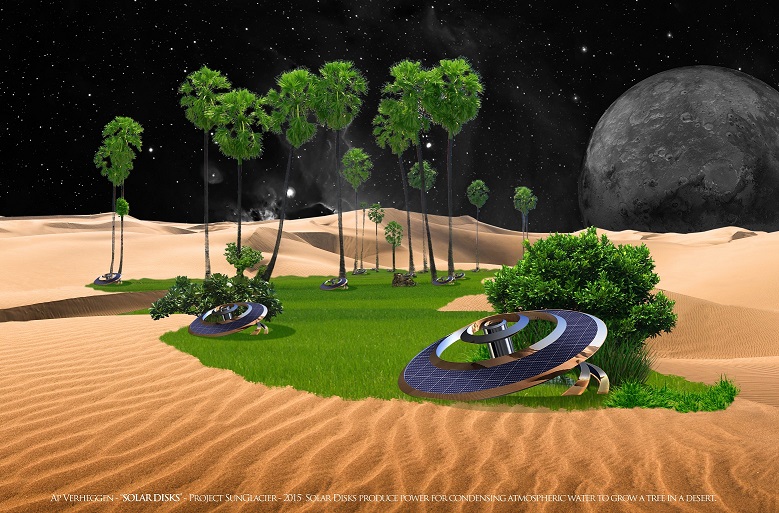 We began project SunGlacier with the intention of sending a positive and optimistic signal to all in the climate debate. It has since evolved into a project focused on ways to apply climate changes for our own benefit.
If temperatures rise, the air contains more water. For instance: A dry and hot desert can contain up to 5 times more water in the air compared to after a spring rain in NYC. Normally, higher temperatures also mean more sunshine. So, why not focus on harvesting water out of the air, powered only by renewable solar energy? In this way drinking water and water for agriculture become available in most dry parts of the planet.
SunGlacier has devised a way to grow a tree in the desert, only using sunshine – as our engineering team proved with tests in a laboratory which simulated extreme desert conditions. And wait, this was only the very beginning! During the last 5 years we didn’t relax in hopes that somebody would help us to get our solution on track, but instead we worked constantly to maximize, improve and surpass initial outcomes. We are now working with a water machine concept that is inexpensive, simple to produce and low maintenance. 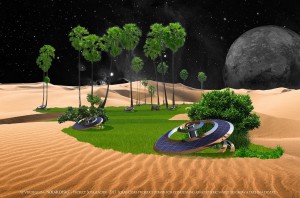 The SunGlacier team and I are proud to announce this promising success, but we are still in the process of refining the physical principles of this new idea. Sometimes, for myself it is actually a greater miracle that my team is still working so tirelessly – along with other commitments – to contribute to a solution for an urgent problem. This could be a contribution to the prosperity of the next generations of people like all of us.
Mr. Ban Ki Moon taught us: “There is no Plan B, because we do not have a Planet B,” which sounds like the battle is already lost. I have learned from experience with several governments and international organisations including the UN, that support for an initiative like ours, a solution, is nearly impossible to acquire because of the absence of an attached economic model. Our “business” is in fact bringing creative innovation to produce the one most critical resource: water.
I only could find one reason for inaction by potential supporting governments/organizations: A renewable energy water project somehow doesn’t fit in common visions of “plan A.”
Much has changed since we started SunGlacier in 2010 when there was already widespread discussion of global warming and climate change. The areas with drought are now spreading with unprecedented speed, climate extremes are smashing record after record everywhere…also in world leaders’ own backyards. In some areas the military has been mobilized to control of water-crisis situations. Food and water shortages are growing, and sparking local water-related conflicts that quickly spread across borders to topple fragile governments.
I watched a documentary last week about water shortages, when the man on screen looked in the camera and said: “Who will help us? Nobody cares.”
That is the reason why we continue to work to get Plan B on track.