september 27, 2013maart 10, 2016 Ap Verheggen 0 reacties art, climate change, News
A balloon helps explain our climate
As an artist I don’t feel as confined by boundaries of science when considering natural phenomena, because it’s more my purpose to see things in a certain way, rather than to offer concrete explanations and/or solutions.  But with my long-time interest in nature and the radical changes in the Arctic regions, I’ve worked up a simple conclusion:  Earth’s climate laws are comparable to a balloon.
The climate change subject has been thrown into an arena with multiple contestants struggling to advance their own theories. Nobody yet has a 100 percent certain answer if the entire earth is heating up or cooling down, but all participants are sending a similar message: our climate is changing.
The Climate Balloon Theory “If you press a balloon in one place, consequences are felt elsewhere. A closed system”
The Climate Balloon Model (in complete balance)

Consider seasons and daylight: as one side of the Earth receives light and heat from the daytime sun, the other side of the planet is cooling down in its night shadow. If the Northern Hemisphere is shivering in winter, the South of our planet is bathing in summer.

The Earth’s surface is covered with 75% water, but water makes up only 0.02% of the total mass of the planet. Because earth has an atmosphere (like the skin of a balloon) water cannot escape into space. Therefore, we come to this artist’s conclusion that the amount of water on earth will never increase or decrease, regardless of if the earth’s system is in balance or not. Water is the only real constant factor. 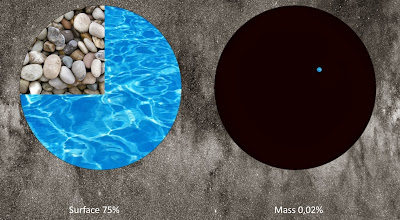 A common prediction is that as some parts of the world become dryer, other parts will become wetter. This perfectly fits my climate change balloon model.

Wind and currents (the equalizers)

In the climate change balloon we can learn that if we have great changes in temperature and water balance, there will be a noticeable effect on winds and ocean currents. The air and oceans are the players who control the system: the climate equalizers. Wind and water currents function as the motor of the system’s balance. In the Climate Balloon Theory, these forces are responsible for changes. A change in an ocean’s current has a larger but slower overall impact than its weaker counterpart, air.

While we know that sea levels are rising in many areas, some data on the NOAA world map caught my attention. I saw dramatic sea level decreases indicated in the Baltic Sea, and it became apparent that water is getting sucked out of those areas. When I consult my balloon model, I see the main streams in the Atlantic Ocean and North Sea becoming more powerful so that they are indeed stealing water straight out of the Baltic Sea!
It makes sense that if sea level rise was only a result of melting glaciers, it would be impossible to explain why some areas are having decreasing sea levels. General consensus essentially states that sea levels worldwide are increasing because of melting glaciers, BUT…..

On some Northern and Southern stations, a sea level decrease is evident. (Alaska and Spitsbergen)

Following my balloon theory and the possibility of greater currents redirecting water flow, other places with few or without stations: Antarctica, Greenland, and many other parts of the Arctic Ocean will experience decreasing sea levels.
But perhaps it’s too ambitious for an artist to create a new theory that sea level rise is mainly driven by the power of changing of currents instead of melting ice caps.
More information on sea levels: http://tidesandcurrents.noaa.gov/sltrends/

The Climate Balloon is never in balance

In a perfectly balanced climate system, every same calendar day over years would have exactly the same temperature. This, as far as I’ve seen, has never happened. Our climate is changing from year to year. Many factors play an important role:  the sun, planets, the moon, etc. I believe there are more factors involved than we are all are of…

Newton’s third law: “When one body exerts a force on a second body, the second body simultaneously exerts a force equal in magnitude and opposite in direction to that of the first body.” (OK, so if a balloon is squeezed in one place to become smaller, another part of the balloon will react by becoming larger).

To maintain a balance, there must be a dynamic system. It’s a quite complicated process that I think nobody completely understands, and it’s anybody’s guess what long-term climate effects will be.

Our weather is essentially like a slot machine. Too many factors are playing their roles. Looking back into trends of recorded history to hypothesise what the weather/climate will be is like observing patterns of slot machine’s previous results and then pulling the lever armed with only a small probability of knowing the outcome – jackpot.

Somebody squeezed the Balloon: Climate Change!
Climate science is relatively new, and in relation to the earth’s age, we are just recovering from an ice age. Our equalizers helped create a balance, but now signs are pointing to a new era: Climate Change. I see the situation as climate changing at unprecedented (and yet unknown) speed and intensity.  A result is more extreme climate conditions.
I have seen the Arctic with melting glaciers around me, and I have also seen temperatures in the same area at 40C above average. The local Inuit said the changes started in the 1970’s, and every year is becoming more extreme. And likewise, locals in Coast Rica told me that they can’t rely anymore on the rain season: forests are dying from a delicate balance that was disturbed by natural forces that are also at play in the balloon.
And by the way, the message below was posted on the site where I tried to do further research on sea ice: http://nsidc.org/arcticseaicenews/ 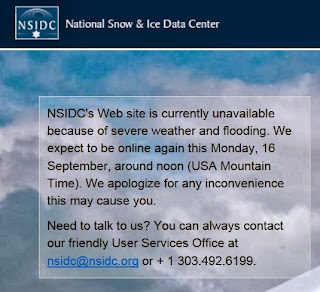 Maybe I should give them a call to tell them more about my Climate Balloon Theory!
Please feel free to repond: apverheggen@gmail.com

mei 31, 2013maart 10, 2016 sunglacier 0 reacties art, climate change, News
“Believe the unbelievable: we can find solutions” is the central theme of a SunGlacier TEDx live presentation in Amsterdam on June 12th.  The entire scope of the need to find climate solutions – and what is being done –  is inspiring and unsettling at the same time.
Climate change has reeled our planet in different directions throughout its existence, and many agree that present changes are contributing to weather extremes in the news.  Phillip Muller, foreign minister of the Marshall Islands, wrote in a Washington Post editorial today that the Pacific country is in a state of disaster over a shortage of drinking water that has been caused by a prolonged unseasonable drought. Crops have been lost and drought-related diseases are on the rise. Muller stated, “Climate change has become the No. 1 threat to my country and our people.”

It’s clear that conditions are changing, but are we actually experiencing more destructive weather?  Or is it just that denser populations over larger areas make bigger targets for extreme weather that is reported more frequently by the media? Spring tornadoes in the U.S. Plains states are not a new phenomenon, but storm chaser videos bring the twisters online and into our living rooms.

Scientists don’t all agree on what’s happening or why. SunGlacier’s purpose is not about answering fundamental questions of why the weather spins the way it does – or who’s to blame. The project is about inspiring belief in out-of-the-ordinary solutions that can help people adapt, survive and prosper.

A simple thought supporting “climate change = culture change”surfaced recently on social media. There was such an outcry for U.S. gun control legislation after the Sandy Hook school shootings, but why aren’t more people calling for regulations requiring tornado shelters or building codes to save lives after the deadly Oklahoma tornado?  Maybe there will be some changes, but challenges in logistics, budgets and long-time planning methods make it difficult to implement quick solutions.  Innovative ideas such as Kevlar-protected rooms have potential if they can be made widely affordable through initiatives like government incentives. (It’s tempting to ponder if these rooms will be equipped with seat belts.) In any case, we can expand these types of responses to strengthening levies in flood-prone areas, finding alternative fresh-water sources, ensuring use of the best available weather warning systems and so on.

(UPDATE: Another massive tornado hit a suburb west of Oklahoma City just hours after this blog was posted, killing 18, including three storm chasers.  The F5 twister was the widest tornado ever recorded at 4.2 km, or 2.6 miles, across.)

Science is of course not close to being able to prevent tornadoes, hurricanes and droughts. We can, however, take steps in adapting to conditions, while still investing in long-term solutions that at least contain hope of keeping current conditions form getting worse. Phillip Muller wrote, “The Republic of the Marshall Islands is accelerating its transition to low-carbon development, using solar power and exploring promising ocean-energy technologies. But our efforts will put only a tiny dent in this problem.”

SunGlacier aims to make ice in a hot, dry desert: an artwork that pushes the limits of technology and conventional thinking. We’ve already tested successfully in a closed setting, but there are uncertainties and new questions when building the structure in open air. The only way to find any answers to this project – and our planet –  is through applied experience and creative plans to continue to adjust and adapt.
Nature’s laws are so complex and unpredictable that we will never find all the answers why our planet’s climate conditions exist, but we still must respond with our best efforts.  Like the SunGlacier project, we only can think about succeeding when we understand that we have to cope with extremities.
And looking toward next month and the TEDx presentation, most people in the Netherlands probably won’t miss this month of May that’s about to go in the colder-than-normal weather records.