Why Are We Freezing in the Desert?

When working on a project as challenging and unusual as building a glacier in the desert, it’s important to be able to answer core questions: Why we are doing this? What can be gained?

We are not concerned with debating why the Earth’s climate is changing; for SunGlacier it’s important to focus on the fact that our climate is changing and that man needs to adapt. A recent report stated that all 12 years so far of the 21st century rank among the 14 warmest of 133 years on record. And more frequent extreme and erratic weather events are getting the attention of even the skeptics. Australia is on a roller coaster of droughts, floods and fires. Hurricane Sandy left a new kind of footprint on New York. Record temperatures are baking, and then freezing populations in a number of regions. The list goes on and wraps itself around the world. Environmentalist Al Gore made his best comment yet last month on NBC, “These storms – it’s like a nature hike through the Book of Revelation on the news every day now. People are connecting the dots.” 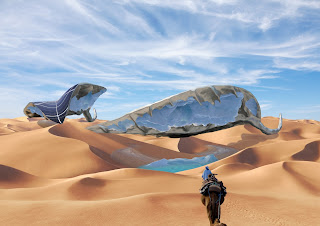 So, what is the answer to why we are here?  We want to put human faces on change, adaptation and a positive continuation of life – instead of using cuddly animals (a kind of “Bambification”) to tell the story. Yes, seals in Greenland are becoming thinner and losing their hair, but hunters and fishermen there are adjusting their methods of survival to adapt to changing ice conditions, sea temperatures and tides. Art projects like SunGlacier can help bring more attention to how people are adapting their most basic ways of supporting life, and hopefully inspire thinking outside of comfort zones to inspire solutions that can carry us more than 100 years into the future. Changes in the Arctic may seem far away until they creep – as they are doing already – into backyards, farms and forests of Europe and the Americas.

SunGlacier aims to challenge people to look beyond the scientific data, beyond the debate about greenhouse gases and carbon footprints, and beyond the politics of what countries practice “effective” environmental standards. These issues of course need to be addressed to mitigate future effects, but our immediate concern is on adaptation. Let’s move away from the naming, blaming and shaming about climate change, but rather find ways how we as people can continue to thrive on our planet – as we have always done in the past. Barack Obama said at his inauguration that failure to respond to climate change “would betray our children and future generations.”

Building a glacier in the desert is a relatively small thing compared to the new kinds of thought that can be inspired as a result. Scientists, artists, government leaders and all corners of the general public need to spend more time and resources on finding collective ways to bring benefits from what is already upon us. In other words, embrace the enemy when possible instead of spilling energy fighting against it. It’s not a far stretch to see where we stand in the title of a classic rock song “Skating Away on the Thin Ice of the New Day.”

It’s fascinating, art as a medium to reach people and draw them into an important exchange of ideas.
Let’s keep it going.