The Dutch Ministry of Defense invited the SunGlacier team to Mali, where we are able to test our idea – making water out of thin air – in the middle of the Sahara desert, the driest, hottest place on earth. It was a success! With our SunGlacier project, we demonstrate that it is possible to harvest water from air, using only solar energy – making SunGlacier probably the world’s first artificial water well to work entirely off the grid.

Before we left, we knew our design worked in ideal conditions; now – after a punishing week in the Sahara — we know we can make it work almost anywhere.

The underlying principle is simple:

When you grab a can soda out of the fridge on a hot summer day, small water drops appear on the surface. This is how we make SunGlacier work: condensation.

So, making water out of thin air in the driest condition is a huge challenge. 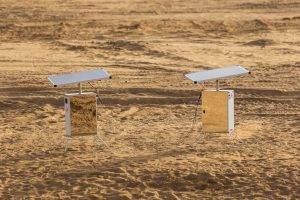 Inspired by Moon Landers, we built the “Desert Twins” especially for this occasion. One of them is the water maker, which runs with the same power as a small car light, the other one contains our energy unit, which stores the solar power.

The first three days of testing were frustrating; our own sweat was the only liquid produced.

Despite the fact that during the course day the water maker was located in the shadow of the solar panel, the unit was still too hot to function. We soon realized that solar radiation reflecting off the surrounding sand was to blame. Our solution was to add a layer of insulation outside and inside of the box.

Next we discovered that by burying a cooling pipe 2 meters under ground – where it is 4 degrees less hot — we could air cool our apparatus in the punishing heat. Unfortunately, the advantage was short-lived: given the insulating properties of desert sand, we soon had heated the sand around the pipe, and the temperature differential dwindled down to nothing.

So to further protect the apparatus from solar radiation – the unit was still too hot — we decided to build a tent around the water unit. But, still no water.

At some point the motor of our condenser started to overheat and make strange noises – the first signs of a total collapse. We re-configured our cooling air streams inside the machine. The noise didn’t stop, but the temperature inside the box decreased. Our morale improved. 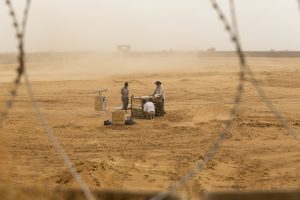 Finally, on the fourth day, we succeeded in cooling the ambient air inside the box to such an extent that condensation could take place and something other than steam was possible. We opened the box, removed the insulation and saw, for the first time, actual liquid water. We had finally succeeded!

But the desert air was so thirsty that we witnessed a new phenomenon: upon opening the SunGlacier our water and ice evaporated so fast, that within 10 minutes everything disappeared. We had just enough time to document our success on photo and video.

On day 5 we produced even more water and ice – the extremely dense ice was harder than a rock.

We had succeeded in harvesting water in very harsh conditions, drawing about the same current as is needed to run a standard car headlight. 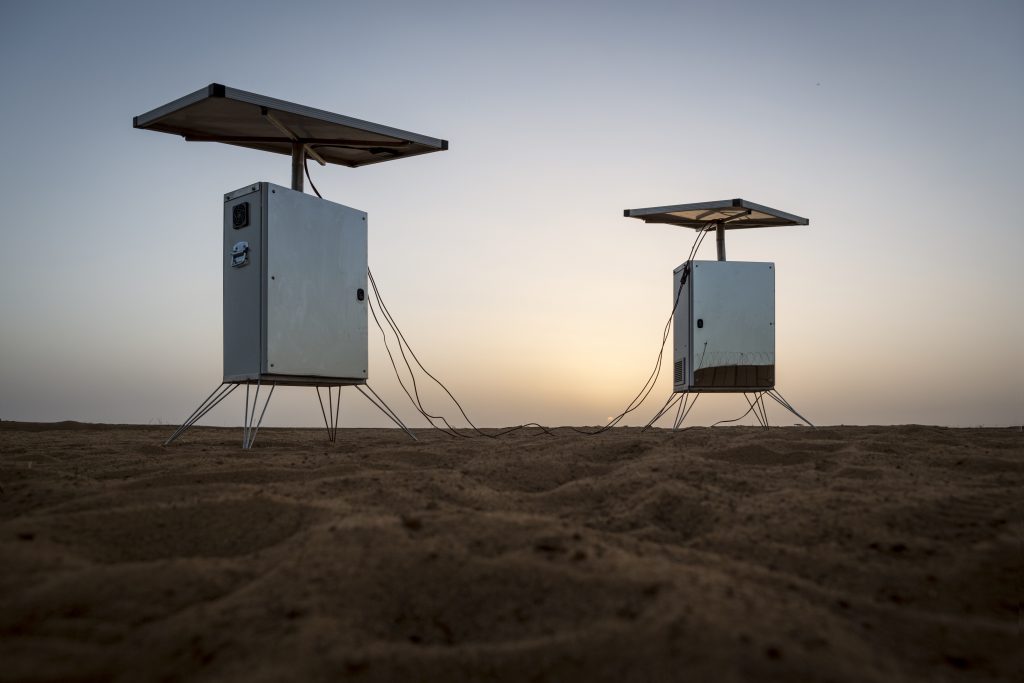 We learned so much in the desert. When we build a next model, our design will be even better. Our next priorities are: water storage and cleaning and enriching the water with minerals and salts.

The aim is to build a machine that works like a well – one that doesn’t need a liquid water source or electricity to operate.

But the real challenge now is finding a way to share our success – and our know-how – with the world.