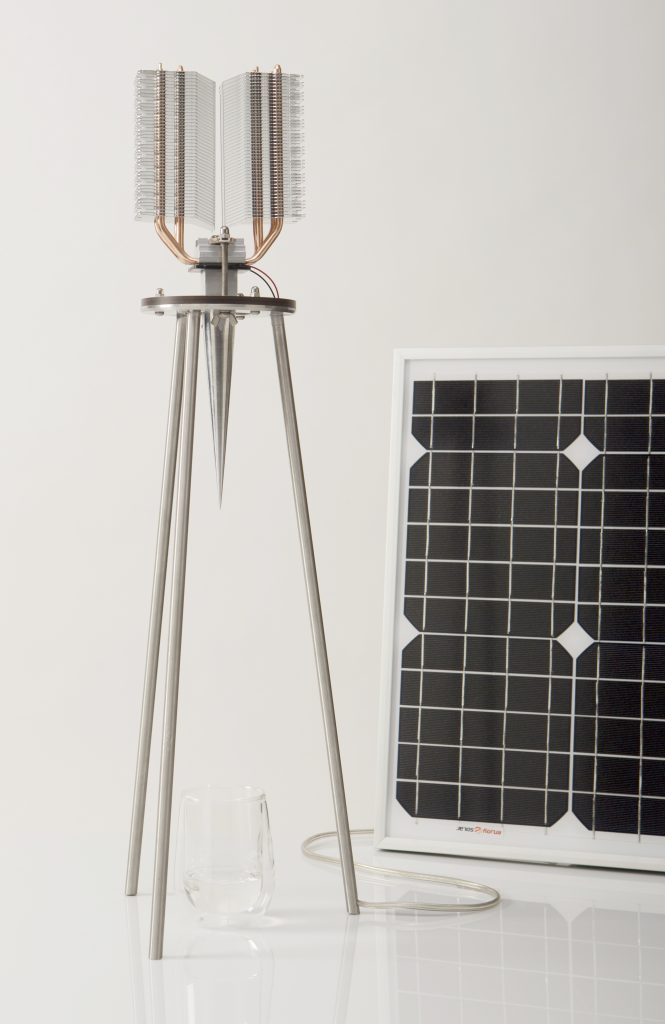 The SunGlacier team has designed a solar-powered, water maker based on Peltier technology that operates without needing batteries or a current inverter. By employing a photovoltaic panel, the X-model generates power for an 18W Peltier element, which cools an aluminum block to below the ambient dew point.

This innovative concept features a new type of artistic design that has been tested, and still has potential for optimization. The surface temperature of the aluminum cooling element is below the dew point of the ambient air, so water will condense on the element surface. SunGlacier has designed several shapes of the cooling element. Water from the air is collected and drips down from the element surface through simple gravity. The Peltier element has a temperature difference of 67C maximum between the upper “hot” side and the under “cool” side. Thus, the more that the hot upper side releases its heat and cools – the more cooling potential is realized in the under “cool” side. Normally the condensation temperature increases when temperatures rise, so the cold side is below the dew point even in hot desert conditions.

A fan is commonly used in this type of process, but a fan’s moving parts are susceptible to breakage. Instead, a no-maintenance self-regulating “heat-pipe”, with no moving parts does the job more reliably for extreme long-term use. By using only a PV panel of 30-50Wp enough power can be produced to run the Peltier element for up to 6 hours a day. (Peltier element starts when generated solar power is > 15W, which is achieved early by using a “oversized” PV panel). A “buck-converter” regulates the Peltier voltage within an acceptable range of 12 volts. 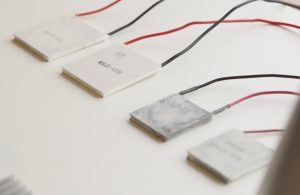 The water production so far is relatively low: approximately half a glass (about 15cl) per 6 hours, even without optimized technology. This is already a milestone because the X-model can run in theory for decades until the solar panel no longer functions or the Peltier element wears out and needs to be changed. Peltier is used in nearly all computers, so it is proven durable technology. The X-model already has vast potential for agriculture, as it can produce enough water to grow smaller plants with low water requirements. The X-model can produce drinking water as well, if the surrounding air is relatively clean and if the water is enriched with minerals. For larger production of drinking water a commonly-available, inexpensive cleaning device should be used. The aluminum condensation blocks have been tested and it was observed that a round shape is far more efficient in condensation than a cone shape. This increased efficiency is because a round shape has nearly equal distance to the cold side of the Peltier element. 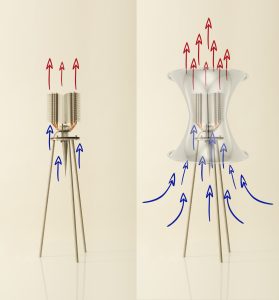 A promising design enhancement is the addition of a cylinder-shaped panel surrounding the Peltier system that creates a natural and higher flow of air around the system, in order to increase water condensation potential.